(too depressed about the invasion of Europe by childless Merkel's kinder-kebabs that this is the best I can do today ) :

Jesse Owens Film : With My Gifts Of Clairvoyance, I Predict That The New York Times Are Going To Love Love Love This Film

I'm surprised it took them as long as it did to make this movie.
Posted by Artur at 7:50 PM 3 comments

...About eight thousand annually. The absolute majority of these births are to African women, and the majority of those have sneaked into French territory from the African mainland.

Mayotte is a former French colony located in the Indian Ocean north of Madagascar. In 2012 then-French president Nicholas Sarkozy organized a referendum that made the Island part of France. Jus solis or birthright citizenship is practiced in France, which means that every one of these illegal African women that squeezes out an anchor baby is entitled to a lifetime of benefits, as well as the privilege of moving freely throughout Europe's 28-country Schengen Zone.

If you thought that non-whites were only flooding into the USA through Mexico and the EU from Syria through Greece, this little video will help you put that illusion to bed.

Regarding Previous Post And The Exchange That Happens At 24minutes 50seconds mark :

The Petit Journal journalist interviewing this black rapper, is 100% serious when he asks the rapper if its song entitled "I Piss In Your Grave" was inspired by Boris Vian's "J'irai cracher sur vos tômbes."

Vian was like a French Kerouac counter-cultural figure. His "J'irai cracher" is required reading for every French public school student.

The Canal journo really believed that his interview subject might be erudite enough to have named his "I Piss In Your Grave" in honor of Boris Vian.

[Sorry having a hard time embedding.

This Is How The French Report On USA Hip-Hop Stars

...Even though nobody invited them and they get everything for free.

This is the calm before the storm, that strange moment before Europeans everywhere wake up and the SHTF.
Posted by Artur at 9:27 AM 0 comments

It is positively mind-blowing to watch this crude cartoon in the context of the demographic invasion going on in Europe right now :

He then goes on to helpfully add : "And the largest brain on record was that of an imbecile."

I bet these troublemakers would have been a lot more careful if they had known that their evildoing would be scrutinized on billions of screens with instantaneous access to unlimited information just a few generations into the future.

Perhaps they thought that their final solution to the European problem would have been remedied by then.
Posted by Artur at 10:15 AM 0 comments

From the Times of Israel : "Israel Bolsters Jordan Border To Keep Out Terrorists, Refugees"

"A combination of terrorism and an increase in the number of “work infiltrators” and asylum seekers who try to enter the country — as well as humanitarian disasters occurring in surrounding countries — mean that Israel needs to ensure complete control over its borders, the prime minister said."

"Netanyahu also reiterated his statement earlier Sunday that Israel is a small country that cannot take in more refugees, despite the “human tragedy,” because it “lacks depth, both geographic and demographic.” He was referring to Israel’s small territory and the fact that many in the country are loath to do anything that could potentially endanger its Jewish majority."


Meanwhile, from the Times of Israel ('s US-Based Infiltrators), we get : "How The U.S. Can Welcome Refugees," by Times guest-communist and former British Foreign Secretary, David Miliband.

"The United Nations has called for the resettlement of 400,000 Syrian refugees over the next several years — which amounts to about 10 percent of those who have been displaced to neighboring countries like Turkey, Lebanon and Jordan. Historically, the United States has taken 50 percent of the world’s refugees who are eligible for resettlement; that is why the I.R.C. is appealing to America to take 100,000 Syrians next year."
"That will require political will and the funding to back it up — both of which most of Europe has conspicuously lacked. European Union leaders meeting this week must put that right."


The demographic invasion of Europe by hordes of gibsmedat muslim welfare-seekers from a land where more than 50% of all marriages are cousin marriages (ewwwwww),  is going according to plan. And that plan - let's face it - is to make Israel safe by fomenting ethnic-based unrest in Europe.

And my how that plan is working !

You will notice that the article by Miliband was published on September 22nd. At that time, the former British MP was optimistically talking about 400,000 refugees.

Yet just two weeks later the word comes out that it's more like one point five MILLION for Germany alone !

The lying troublemakers behind this madness are pleased as punch that everything they've been campaigning for so relentlessly is coming blessedly to pass.

How incredibly ironic that all this is going on right in the heart of the 50th anniversary of the 1965 Immigration Reform Act, which when signed into law on October 3rd 1965 was defended by goy puppet Ted Kennedy as something that would not "fundamentally alter the demographic makeup of the United States."

The schutzpah of these lying scum is simply unbelievable.

Lies By Omission : The Weasels At The NYT Fail To Mention The Most Salient Feature of Mixed-Race Spree Killer Who Couldn't Get A Girlfriend In Oregon

The dude had a white father and a black mother, but the Times didn't think you needed to know this.

The front page photo they published of this mud does not make it clear to the reader that the killer's father had a bad case of jungle fever 26 years ago, in fact with the large glasses this p.o.s. who admired Vester Flanagan the failed live-tv murderer, looks positively white.

The New York Times posts front-page video footage of the killer's white father and white half-sister, furthering the impression in the minds of the Times' PC-bludgeoned readership that this was an act of murder committed by a white male.

This worthless race mixing experiment gone wrong was the product of the evil social re-engineering project endorsed and relentlessly pushed by Amerika's newspaper of record for the past 50 years (today is the 50th anniversary of the 1965 Immigration Reform Act by the way). We haven't seen photos yet of the creature's mother, but based on the fact that he looks a lot less black than Obama, it is highly likely that his mother was a light-skinned black woman. 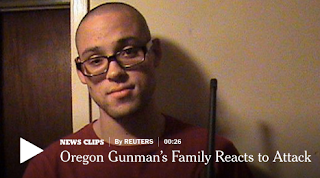