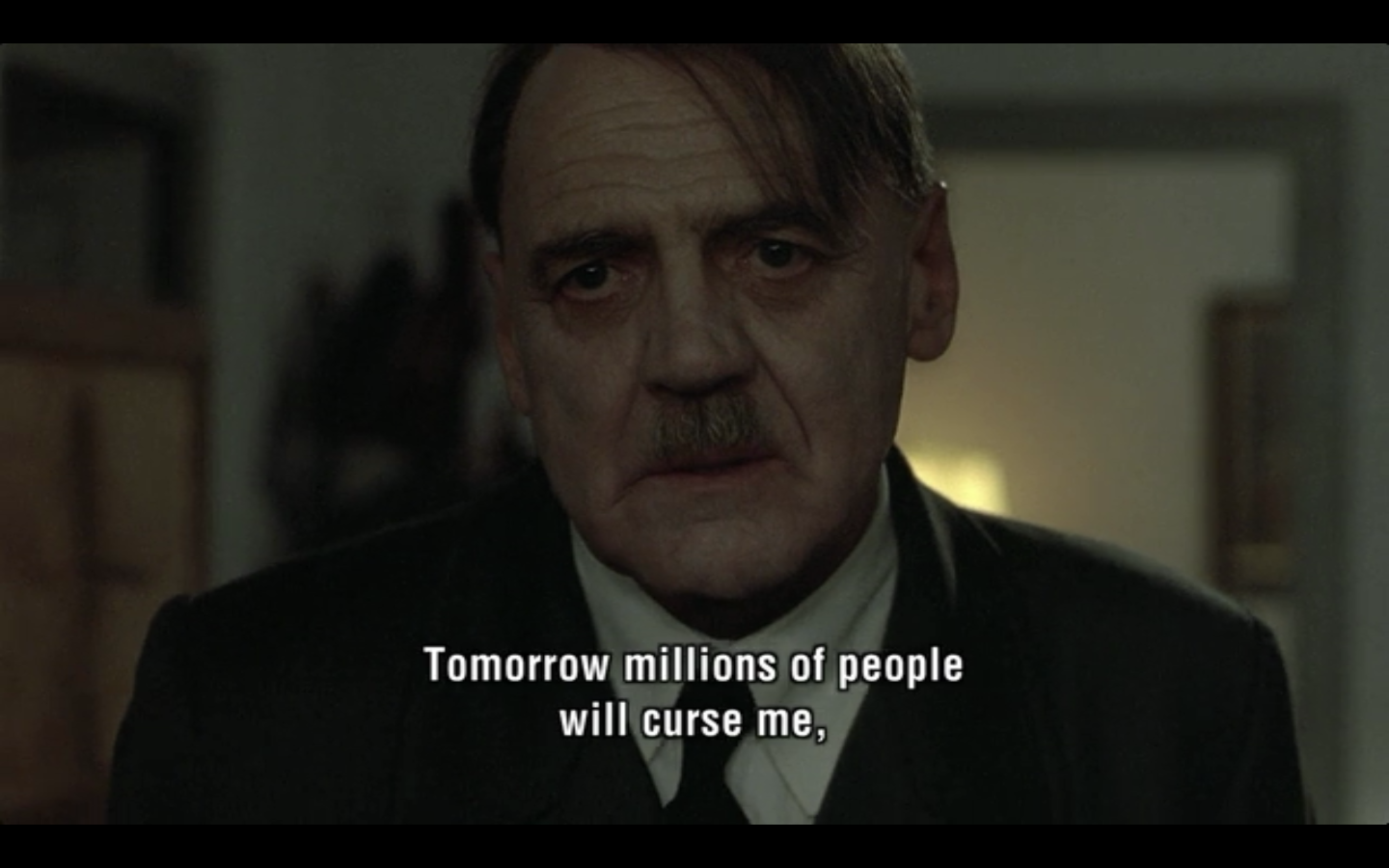 Viking Exhibit At The British Museum : A Surprisingly Fair Portrayal In Today's NYT

I have to admit I was expecting the vermin at the Times to be a lot worth in an article with "Viking" in the title :

After all the evil little mensch at the New York Times don't exactly have an affinity for Nordic types, much less our pre-enrichment ancestors and their jingoistic ways.

That's why this little diddy by Times communist Katrin Bennhold (wink) caught me by surprise.


"But the Vikings’ travels took them much farther afield. One gets a glimpse of their impressive reach in the display of a single hoard, buried in the Vale of York in northern England in 927 and discovered only seven years ago. There are precious objects from countries as different as Ireland and Afghanistan, spanning three belief systems and seven languages. Inside a silver cup from modern-day France, fragments of a Russian neck ring and a host of Islamic coins, among other objects, were found.

“Most people know that the Vikings got around Europe and traveled to North America, but few know that they were instrumental in Russia’s development and in the development of trade and contact with the Islamic world,” said Mr. Williams, the curator." 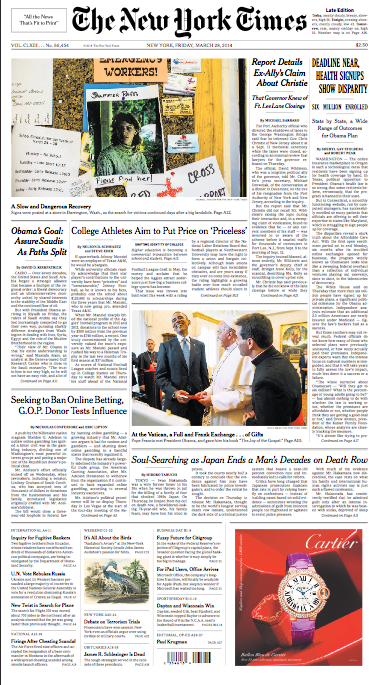 This is slightly O/T, but it is yet another tiny bit of proof offered in furtherance of revealing the shocking Agenda to which the vermin at the New York Times are the principal paid media agitators :

Switzerland just shocked her brain-bleached European neighbors, by voting 50.3% to restrict mass immigration to that bejeweled place of snowy peaks and refinement.

Unfortunately for the anti-Population Replacement crowds in Europe, the fact is that the city of Geneva has had an explosion in criminality in the last few years, and, even more unfortunately for the champions of the  Great European Erasure, the Internet (even in Switzerland!)  has made it possible for even the dumbest, most TV-addled Swiss goyim, to read up on what is really going on in their historically isolationist homeland.

A passing glance at the Geneva police crime blotter, will quickly reveal that virtually every single act of criminality in that city on a lake, is today likely perpetrated by a very specific demographic: namely newly arrived illegal immigrants from mostly Northern Africa. In just about every case of purse-snatching, drug dealing, robbery, and criminal violence and aggression of any stripe, the perp is going to be a mid-20s north African male,  on average.

For example: a quick glance at the Geneva (Switzerland) Municipal Police crime blotter for today Friday 28 March, gives us this : 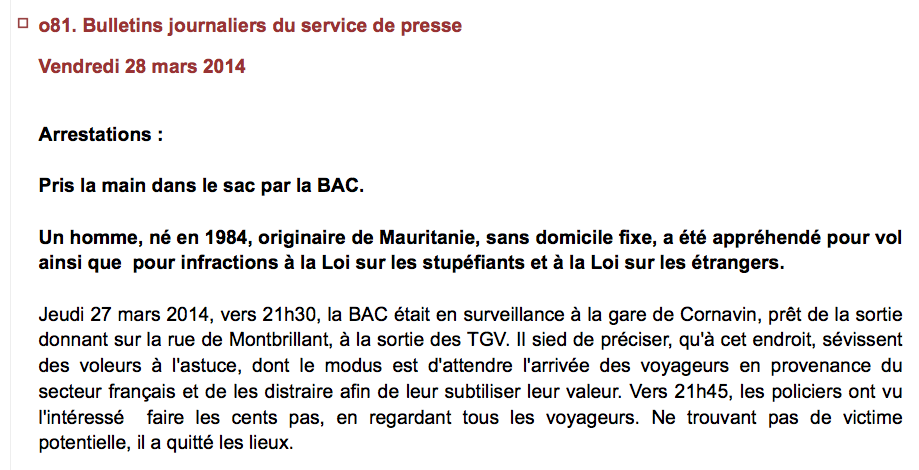 (Translation: "A 30-year-old homeless man from the Islamic Republic of Mauritania in west Africa, was arrested today on charges of theft, narcotics,  and violations of Swiss immigration law.")

If you read through the Swiss Geneva municipal police crime reports, you will see that fully 90% of perps are illegal alien young man from Africa, mostly north Africa.

Therefore, in this context, it is somewhat to not say "highly" understandable, that the Swiss people would vote to reduce the mass importation of non-Swiss into their beautiful neutral country.

And yet, throughout Europe, the Great Replacement Agenda police, are lambasting the Swiss for their racist and xenophobic instincts of self-preservation.

It needs to be understood that the Agenda is deeply rooted within the institutions of the nations that it targets.

The news desk at Crimes of the Times has been shut down for the past three weeks.

In those 21 days, the verminous reality manipulators at America's newspaper of record have turned up the dial on their propaganda reactor to "11".

Like the sickly, reptilian parasites they emulate, the vermin at the NYT are confident in the success of their infection of the host; unmolested they pile new lies atop old ones, untouchable in their sinister ability to smear anyone or anything that contesteth their word with the hate-term "hater."

Please stand by for new programming.
Posted by Artur at 9:35 AM 0 comments

One glance at the glaring, stupid, prognathic mugg of this hateful professional race-hustler tells you everything you need to know about "NYT Columnist" (lmao) Charles blowfish Blow:

Today this disgusting race-baiting racist Blowfish published yet another article in the sanctimonious pages of Amerika's "newspaper of record," entitled: "Father's Sons And Brothers Keepers."

Get ready for some shite, because Blow's article goes in part like this:


"When there is an empty space where a father should be, sorrow often grows. The void creates in a child an injury that the child is often unable to articulate or even recognize.

And what children miss at home, they will often seek in the street, to ill effect.

Many boys with that empty space lash out and act up, trying to be seen, searching, as people do, for love and affirmation, wanting desperately to be validated. And too many of us, in turn, see them as menaces rather than as boys struggling — often without sufficient instruction and against a tide of systemic inequity — to simply become men. In such a warped world, basic survival can become a metric of success.

Sickening, repulsive, blame-shifting relativism that in a sane society would be punished by forced deportation to a re-education camp, or worse (better?).

What this a-hole Blow is saying here, essentially, is that: if young black males (BMs) act up and kill some bitches, rape some bitches, ax-identally shoot some bitches, well, it's not really their fault. The Devil (whitey) made them do it, and therefore you should just chill the eff out. And spend a couple trillion more dollars to uplift the Knee-Grow to his rightful place in society. Nomesane?

That in a nutshell is what this sickening fraud, this fraudulent Charles Blow, is saying in the Op-Ed pages of the so-called most relevant newspaper on planet earth.

Instead of addressing the core issues behind criminality in the US in 2014, instead what we get in this sick sick sick USA, is a Negro apologist at his pulpit at the so-called newspaper of record, blaming everything and everyone but the real perps, for out-of-control young BM criminality.

The fact that the NYT is so up-to-their-necks complicit in this duplicity, should make the Sulzies scared as hell about the inevitable future day of reckoning.

It can not come fast enough, for this impartial observer.

The New York Times: Empowering low-wattage race hustlers like Charles blowfish Blow since the Jason Blair Affair.
Posted by Artur at 12:34 AM 0 comments

Obama Invites His Sons To The White House; The NYT Gets Giddy With Brotherly Love For This Presidential Act Of Racial Unilateralism

Without a soupcon of irony or the tiniest morsel of self-consciousness, the verminous and sinister anti-white weasels at Amerika's newspaper of record published a story today that was announced on their front page - the most expensive publishing real estate on planet earth btw - with a photo of Obama in the White House surrounded by several young African Americans who could all have been his sons, according to the president.


Any educated person even remotely familiar with the history of Haiti, for example, knows by now that platitudes and make-believe are not the answer to attenuating the misery in that godforsaken place. Or any place where Obama's sons are in the majority.

Seeing Obama today surrounded by his sons, with the promise of another 200 million Federal (white taxpayer, mostly) dollars to uplift them (Bloomberg gave 100 mil of his own denero to uplift negroes and hispanics in New York ; Zuckerberg gave one hundred million of his own hard-earned (snicker) Fscebook dollars to the all-Negro Newark public school system, and the list of verminous self-facilitating morality athlete status whores goes on and on and on...)  is a forceful reminder of the 2007 quote to a London newspaper by Nobel prize-winner James Watson, who said (thereby ending his lifelong career at Cold Harbor) that:  public policy focusing on Africa will always be wrong and misguided until we recognize that Africans have an overall different cognitive ability.

It is not a mean thing to say, it is fact. It is reality. Like a drug addict who refuses to admit his own addiction, as long as the West continues to deceive itself about the very real biological nature of the achievement gap, absolutely nothing good will ever come of these so called up-lift programs for minority youth.

The iron gloves of PC One-Worldism indoctrination must be cast off once and for all, if anything is going to change for the better.

Public policy in the West cannot continue to be formulated under this Nansy Pansy, utopian wann-a-be, psycho egalitarian wishful thinking.


“It doesn’t take that much, but it takes more than we are doing now,” Mr. Obama said.

“We will beat the odds. We need to give every child — no matter what they look like, no matter where they live — the ability to meet their full potential.”

He also challenged black men to do better themselves, and said they must not make excuses for their failures or blame society for the poor decisions they have already made.

“You will have to reject the cynicism that says the circumstances of your birth or society’s lingering injustices necessarily define you and your future,” Mr. Obama said.

“It will take courage, but you will have to tune out the naysayers who say if the deck is stacked against you, you might as well just give up or settle into the stereotype.”

“Nothing will be given to you,” he said.

And yet, for the vermin at the New York Times, front page news.

The New York Times: complicit, guilty-as-charged in the decline of the West, since 1898.