The New York Times Sides With Justice Sotomayor ; These Are The People They Are Fighting For

Over and Over Again, the Vermin at the New York Times Keep Telling us that an "American" Won the Boston Marathon...

Does this dude look like a standard-issue "American" to you ? : 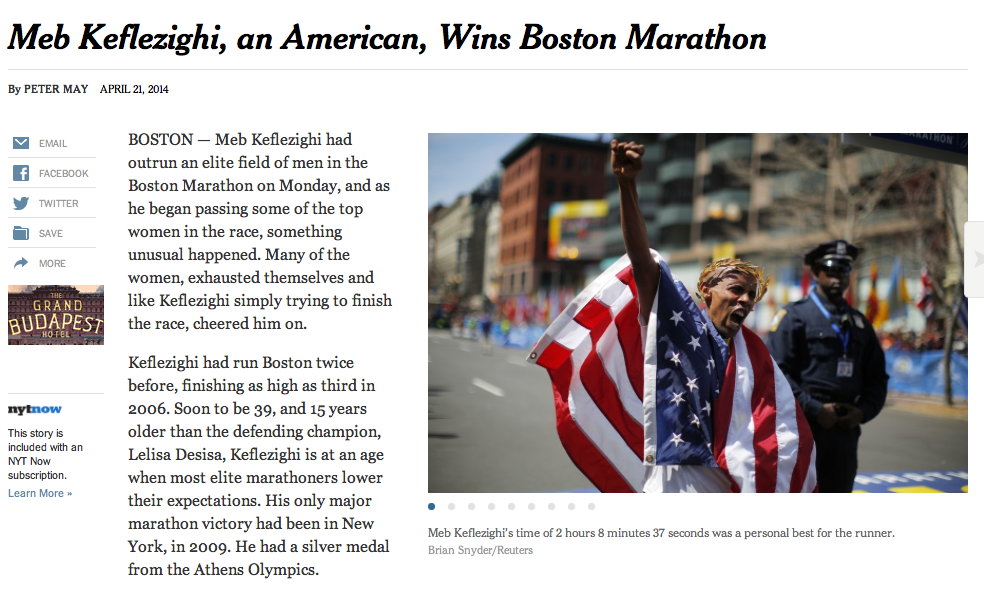 Not once in their 2014 Boston Marathon coverage, do the swine at the Times even hint that this year's Bean Town Marathon winner was born in Eritrea, east Africa, and thus is a member of the same  negroid-persian ethnic group that has been dominating US-organized marathons for close to thirty years.

To report it any other way, as in "US-based East-African asylum grantee Meb Kefle-whatevuh, won the Boston Marathon on Saturday, proving once again that east Africans are genetically pre-disposed to certain endeavors..." , would be to violate the Times' own noxious head-in-the-sand worldview , wherein race is just a social construct.

The vermin at the New York Times will have their just desserts any day now. Let us hope that it is sooner rather than later.
Posted by Artur at 1:21 AM 1 comments

The vermin at Amerika's newspaper of record love Love and I mean LOVE American negroes.

It's practically to the point where the Grey Lady's motto could be instead  : "All the News That's Print To Fit American Negro Hagiography."

Case in point: an utterly obsequious puff piece published today Saturday 19 April on page A16 of today's national edition, entitled "A Generational Divide Worn On Their Heads," by Times communist Samuel G. Freedman in his hilariously disingenuous column known as "On Religion". (Motto: when subjects are non-white, their religious fervor will be cast in a positive light; However: any story touching on white people and their religious faith, will seek to portray said bible-thumping whites as backwards cultists.).

Sammy Freedman: you are hypocritical little worm. Your day will come.


The scriptural basis for the tradition resides in I Corinthians 11, which declares that “every woman who prays or prophesies with her head uncovered dishonors her head” (New International Version). Even more relevant for African-Americans of both genders was the pervasive degradation and humiliation inflicted upon them by slavery, segregation and racism. To get decked out for church — suit, tie and pocket square for a man; stylish dress and coordinated hat for a woman — was to assert one’s dignity as a citizen and one’s value as a child of God.
Given such a profound purpose, it is hardly surprisingly that the church hat became staple in all its swooping, feathered grandeur. The 2000 photo book “Crowns: Portraits of Black Women in Church Hats,” featured a foreword by Maya Angelou and was adapted for the stage by Regina Taylor. The collection of the National Museum of African American History and Culture, which will open this year, includes several dozen hats made by the renowned Philadelphia milliner Mae Reeves.
Outside museum doors, however, the atmosphere around the black church has been shifting. The educational and professional opportunities opened up by civil rights legislation and the diversity movement have meant, for an increasing number of black men and women, that dressing up is now a Monday-through-Friday requirement, not a Sunday morning ritual of auto-emancipation.


"Dressing up is now a Monday-Through-Friday requirement"?

What planet do these Yankee NYT communists even live on?

The New York Times: Stoking The Flames Of Racial Resentment Since 1896.

Sorry COTTers, but we've been a little busy these past few weeks up here in Mission control, working
on other endeavors.

We promise to get back to exposing the New York Times on a daily basis again soon.

COTT In Crisis Mode : Let The Schadenfraude (From the Left) Commence

Our side doesn't have the funding that the mainstream side has.

Our side doesn't have the  propaganda infrastructure over time  that the other side has.

Our side doesn't (yet) have legitimacy in the eyeballs of the television viewers who sensed that something wasn't quite right when they saw this :


...and then as a result of their discomfort with the daily corporate media force-feeding diversity down their malleable gullets, the NGO anti-euros cranked it up a notch, to give us a cripple white guy with not one happy little nappy-headed chirren, but two :

These sickening and quite aggressive displays of anti-white propaganda are becoming more frequent and more insidious.

The vermin at the New York Times helped make this crap possible.