Hurricane Katrina Ten Years On : A Fascinating Reveal Of The High Self-Concept, Low-Comprehension Mindset Of The City's Refugees

A quick glimpse around main stream news sources about how it really went down in New Orleans ten years ago today, will reveal countless hours of footage of blame-shifting hyperbola, where looters are victims and where trillions in aid is never enough.

In other words the Official Narrative today amongst the Those Who Can (not) See crowd when it comes to Katrina :

- Blacks died and suffered because racism.

Take for example racial grievance professional Spike Lee, who in his appallingly one-sided racist hit piece "When The Levees Broke" makes it pretty damn clear that whitey be bad :

We are hopeful that Katrina happened at a time of peak PC in this  Modern World, and that were it to happen again today, the nation's mainstream press would portray african American misbehaviour for what it really is, and Not for what they wish so bad they could portray it as (excusable, solely the result of white privilege & oppression).

This 10th anniversary of one of the most shocking disasters in American history comes at a strange and interesting time :

There is little doubt that the tens of thousands of then-clueless white Americans, would think twice before once again volunteering to shelter in their own homes entire families of public housing-project ghetto blacks (who can at least be credited with reality bitch-slapping a few handfuls of gullible whites).

Gaze for yourself through the archival pics of this decade-old Katrina aftermath : in image after image, you will see the same scene repeating itself over and over again : blacks being rescued by whites.

Listen to the NPR archives, and you will hear - not see - the Official Narrative :

"They wanted to kill us"

"They was playing wit us"

"They ain't give us no food"

"They ain't give us no water"

"Who gone take care my baby?"

"Why they did that?"

I really don't like anything Made In China, but I'll take exception here, with their famous phrase :

"May you live in interesting times".

Because this is going to get interesting, in the next few quarters.

Check back periodically on COTT to see why.

Naturally however the sanctimonious competitive compassion cowards at the New York Times - they of non-stop professional black uplift fame - reflect instead on how the evil white privilege establishment "failed" the scores of gibsmedat government-sustained blacks who chose not to evacuate the city even after it was made starkly clear that staying in New Orleans could be deadly.

For the rampaging reality reversers of Amerika's newspaper of record, individual responsibility simply does not exist, and can not  be expected of the dindus the Times so shamelessly pander to : if something bad -- anything bad -- either happens to or is caused by an African American, then evil white privilege is to blame. No matter what.

Thus the whole Katrina narrative, shamelessly warped by the scum at the NYT into a blame-shift paradigm that fully obscures and confuses reality, in order to conceal what really happened in August 2005, namely : BBB.

In an article entitled "10 Years After Katrina" that was published on the front page of the New York Times three days ago, Times communist (columnist oops) and SWPL, SJW Campbell Robertson, has his tongue thrust so far up the rectums of the New Orleans African Americans who went tribal haywire ten years ago to the day, that this is the only conclusion he can draw from the Event That Put Modern American Black Dysfunction on the Times' Front Page : 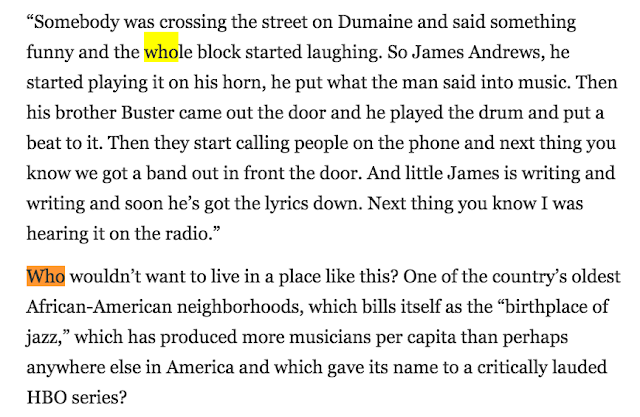 Who "wouldn't want to live in a place" filled with the kinds of people featured in (and who caused) some of the most gruesome Katrina scenes of utter social breakdown ?

And how about : every sane person on earth ? Including other blacks ?

That's right you just read that  : Amerika's newspaper of record dumping absolutely all pretense of journalistic objectivity, in furtherance of the Black Victimhood Narrative.

How is this even possible?

Answer: the controlled media's chokehold on the minds of sports- and entertainment-addled ordinary Americans is starting to ease.

An awakening is in progress, thank you Mister Internet.

The New York Times : "How Is It Even Possible For A Newspaper This Big To Be So Hopelessly Deceitful ?",  Since 1898.

These beaners and other assorted oppressed "victims of white privilege" have been riding high the past couple of years on a soaring tidal wave of anti-white racism, and with the full support of the Establishment. Encouragement of the establishment, we should say.

(please go to two minutes and fifty-eight seconds in the video below: I am having some trouble coding in the exact start time)

What a gift it is to see,  for once, a white male politician putting a Mexican in its place as opposed to way that a mexican would get pandered to by the spineless elite of the Beltway in any other press conference.

Jeb Bush? Are you f**king kidding me? For gods sakes the guy married a Mexican rock troll who no speakee dee eengleesse and is half his height, and there's a strong possibility that Jeb, this sickening monument to cuckservative spinelessness, has bedded one and only one woman in his entire life: the maid he married at 17.

Six months ago I never thought I would have wrote such a thing about Donald Trump.

But now I admire this guy a little bit more every day.

At 19:20 in the video Trump also delves into the anchor baby amendment debate, after he let the Mestizo (Jorge Ramos) who tried to interrupt him a few minutes prior, back into the press conference, as he had promised.

Holy Jesus I feel like a just inhaled a lungful of nitrous oxide, hearing a US presidential candidate talking about the INSANITY of the 14th amendment is a beautiful, beautiful thing.
Posted by Artur at 9:06 PM 2 comments

By the way : to get a youtube clip to play at the precise moment it gets interesting, simply append the embed code with "t=XmYs".

It's easy for nerds, less so for normal people like Arturo.

A Day In The Life Of African "Asylum Seekers" In The Jungle At Calais, France :

Take a good look at the young african illegal immigrants to France in the video below.

Make special note of their eyes.

For they are the future of Europe.

Europe has made them Europe's future.

Make no mistake : if something drastic is not done and very soon, if there is not some kind of generalized awakening/pushback among euros, Europe will cease to exist as a continent of European nations in our lifetimes.

Meanwhile, on this side of the Atlantic, the hate-filled vermin at the New York Times - Amerika's "newspaper of record" if you can stop cringing long enough to process that - have been ramping up their vitriol of late, and going to preposterous lengths to stand behind the criminal Michael Browns of this sad and disintegrating world :

"Around 8:30 that night, Mr. Harrell — whose nickname was JRock — told two officers that his wife and sister were coming to pick him up and take him home, according to one inmate’s affidavit.
"His earliest release date from prison was September 2020.
"The officers called for medical and mental health assistance but could not reach anyone, the inmate reported. Soon after, the inmate said that two more officers arrived. “I believe JRock panicked after seeing all those officers surrounding him,” the inmate wrote. “JRock jumped up and ran.”
"Mr. Camara said he was in the day room, watching a playoff game between the Boston Celtics and Cleveland Cavaliers, when he heard a commotion in the hallway. “Me and other inmates, we hear the walls shaking, doom, doom, doom, doom,” he recalled. “Somebody opened up the door and looked outside, and said, ‘Yo, that’s JRock they got out there.’ ”

"He was on the floor, face down and handcuffed, several inmates said. In short order, a large group of officers converged around him. The inmates in their affidavits and letters identified nine officers by name as being involved.
“I saw the officers kicking him, jumping on his head multiple times and screaming, ‘Stop resisting,’ even though I didn’t see him moving,” wrote Mr. Pearson, who has since been released after serving two years on a weapons charge.
"None of the affidavits or letters mentioned Mr. Harrell’s fighting back or speaking during the encounter. Several said that once he was on the floor, handcuffed, he stopped moving, and a few of the inmates speculated he may have already been dead by then."

That is correct: the hateful, verminous, racist scum at the New York Times want their stupid SWPL readership to question "authority," and believe not the largely white corrections establishment, but rather the convicted criminals housed in - granted, the world's most populous, but also most PC - prison system.

Is their no limit to the perfidy displayed by the cunning, duplicitous, and disingenuous scum that write for this country's newspaper of record?

People everywhere are slowly starting to wake up to the choke-hold upon them in the Western World by the forces of evil that run sickeningly hypocritical and anti-white rags like the NYT and all of Hollywood for that matter.

There is going to come a time and pray Allah may it not be too far off, when the nakedly and unabashedly evil Liars at the New York Times, are called to account for their crimes against innocent, innocent, gullible people.

The New York Times: Pinky & Co. Have Had A Good Run, But People En Masse Are Finally Starting To Wake Up To The Sickening Racist Zionist Supremacist Agenda That Drives This Repulsively Anti-Partial Newspaper Empire, Since 1898...

While Awaiting A Chance To Bum-Rush England, Illegal African Invader Immigrants Bite The Hand That Feeds Them In Calais, France

And the scum at the New York Times pretend to not understand why organized reaction to this insanity has been percolating throughout Europe, and growing in intensity these past few years.

The throbbing, pulsating, ever-expanding, oxygen and mineral-rich tumor that is African overpopulation (thanks Bill and Melinda!) is a clear and mortal threat to the entire world, and even to Africa itself. But mostly the TMA phenomenon ("too many africans") threatens Europe. And Europeans. As in, wherever they may be (Oz, USA, NZ, SA, Can.).

How is it possible that supposedly intelligent members of the European elite can not grasp the obvious? Aka :

Answer: they can, and they do, but they won't.

Because: Feels. Aka competitive altruism. Aka reaction to white guilt. Aka I'm pretty sure we can blame the Tribe.

Perhaps when we see sickening and graphic displays of white liberal lunacy, alongside the totally alien, beastial, animal hivemind behaviour of the sub saharan africans featured below, we feel a tinge of schadenfreude, because we know that these SJW crusaders are helping to create a dark and sinister future for their own kind.

And that future is now.

Illegal Immigrant Africans Selling Chinese-Made Eiffel Tower Statuettes Attack Cops In Paris : These Are The People The NYT Defends Day In And Day Out