The New York Times just won't let this one go: 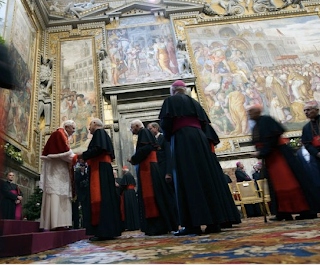 On page A13 of the national section, the four-eyed psychos at the NYT published an article today entitled: "Pope Says Sexual Scandal Hit an Unimaginable Degree." We too thought that title sounded a little strange - it is the Times grasping at everything and anything they can to smear the Catholic Church.
You see, the cult of liberalism is the new religion for the West in the wishful-thinking minds of the psychos at the Times: it needs to replace the dreaded opium of the people, Christianity. Of course, Islam is okay, but Christianity in general and Catholicism in particular will be sneered at by the repugnant elites at America's newspaper of record.
What is even more sickening than this never-ending attack on the one institution that has done more for the good of human kind than any other over hundreds of years, is the sheer hypocrisy displayed by the Times when they use allegiance to it to promote their pro-immigration agenda.
Consider a few excerpts from this nauseating article, published on page A13 of today's national edition and entitled "After Dream Act Setback, Eyeing a Sleeping Giant":

"About 37 percent of Texas residents are of Hispanic origin, and the state has a long history of welcoming newcomers who work hard and obey the law. So the state would seem likely to support a bill to grant citizenship to thousands of foreign-born college students"

Excuse me?  How low can the Times go? Even the crypto-delusional reality dodgers at the Grey Lady know that they are lying when they call illegal immigrants "foreign-born college students."And since when are illegal aliens a "Sleeping Giant?" Consider the double-entendre of using this phrase to describe Mexicans: They are giants, therefore noble and pure; and since they are sleeping, they are a formidable force to be reckoned with, one that will stamp down hard on the neck of the hated Euro-majority. That is what the Times is saying when they print such subversive words.

It is curious indeed, what this newspaper seems to be wishing for. "There is a lot of anger, disillusionment," the Times quotes one illegal alien Latino from Texas as saying, but then they are quick to point out that this criminal is the president of a Catholic organization in San Antonio that lobbied for the Dream Act.

The hypocrisy at the New York Times is sickening. We fear that it is getting worse, too.
Posted by Artur at 2:24 PM