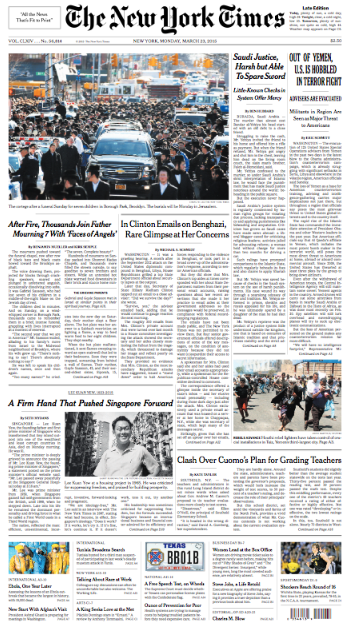 The vermin at the New York Times published news of her death today.
Interestingly, the Times obit paints a rather honest picture of this old, resource-ravenous bird (from the moment she stabbed King in September 1958, she lived at taxpayer expense in institutions for the criminally insane).


"Izola Ware Curry, the mentally ill woman who in 1958 stabbed the Rev. Dr. Martin Luther King Jr. at a Harlem book signing — an episode that a decade later would become a rhetorical touchstone in the last oration of his life — died on March 7 in Queens. She was 98.

Ms. Curry died in a nursing home, the last stop in the series of institutions that had been her home for more than half a century. Her death, confirmed by the office of the chief medical examiner of New York City, was first reported by The Smoking Gun, the investigative website.

What surprised many observers at the time of the crime was that Ms. Curry herself was black, the daughter of sharecroppers from the rural South. Questions persisted about what could have moved her to attack Dr. King, then a 29-year-old Alabama preacher who had assumed the national stage amid the Montgomery bus boycott of 1955-56.

The stabbing nearly cost Dr. King his life, requiring hours of delicate surgery to remove Ms. Curry’s blade, a seven-inch ivory-handled steel letter opener, which had lodged near his heart. If he had so much as sneezed, his doctors later told him, he would not have survived.

Dr. King, who said afterward that he bore no animus toward Ms. Curry and did not want charges pressed, memorialized the attack in “I’ve Been to the Mountaintop.” That speech, delivered in Memphis on April 3, 1968, the day before he was assassinated, endures as one of his most famous.

“The X-rays revealed that the tip of the blade was on the edge of my aorta, the main artery,” Dr. King said in the speech. “And once that’s punctured, you’re drowned in your own blood — that’s the end of you.”

Of all the letters of consolation that poured in to the hospital, he continued, there was one that “I will never forget.”

“Dear Dr. King,” it read. “I am a ninth-grade student at the White Plains High School. While it should not matter, I would like to mention that I’m a white girl. I read in the paper of your misfortune, and of your suffering. And I read that if you had sneezed, you would have died. And I’m simply writing you to say that I’m so happy that you didn’t sneeze.”

If he had sneezed, he continued, he would not have seen the Freedom Rides of the early ’60s, nor given his “I Have a Dream” speech at the Lincoln Memorial in 1963, nor seen the passage of the federal Civil Rights Act of 1964, nor been involved in the Selma-to-Montgomery marches of 1965.

And so, Dr. King concluded, “I’m so happy that I didn’t sneeze.”

He was shot to death by James Earl Ray in Memphis the next day. [;-)]

Apart from Dr. King’s speech, Ms. Curry vanished from history. Deemed unfit to stand trial, she was committed to a mental hospital; as the years elapsed and no more was heard of her, she was widely presumed dead. Even a 2002 book about the stabbing, “When Harlem Nearly Killed King,” by Hugh Pearson, does not chart her life’s later course.

Then, in a profile published last August, The Smoking Gun wrote of having found Ms. Curry, physically and mentally feeble, at the nursing home, Hillside Manor, in the Jamaica section of Queens.

“While Curry described her daily routine — up at 5:30 a.m., bed around 10 p.m., and not much going on in between,” the profile said, “she met questions about King and the stabbing with a furrowed brow and a blank stare.'

Izola Ware was born on June 14, 1916, near Adrian, a village in east-central Georgia. She appears to have had little education beyond grade school.

After a brief early marriage to James Ware dissolved, Ms. Curry moved to New York, where she found work as a domestic. There, she began to experience the paranoid delusions that would overtake her completely before she was 40.

Her mental state made it increasingly hard for her to hold a job. As Mr. Pearson’s book reported, she bounced among New York; Cleveland; St. Louis; Charleston, W.Va.; Savannah, Ga.; Miami, West Palm Beach and Daytona Beach, Fla.; Lexington, Ky.; and Columbia, S.C. By 1958 she was back in New York, living in a rented room in Harlem, at 121 West 122nd Street.

“To her neighbors she was a very antisocial woman,” Mr. Pearson wrote. “Curry spoke with a distinct Southern accent, but her words were often unintelligible.”

A half-dozen years earlier, she had begun having delusions about the National Association for the Advancement of Colored People, which she believed was a Communist front. In her mind, the group was persecuting her — following her and making it impossible for her to find steady work. She wrote letters to that effect to the Federal Bureau of Investigation.

Over time, as Dr. King rose to prominence, her delusions centered increasingly on him.
On the afternoon of Sept. 20, 1958, Dr. King was autographing copies of his first book, “Stride Toward Freedom: The Montgomery Story,” in Blumstein’s department store, at 230 West 125th Street.

Ms. Curry, elegantly attired in a stylish suit, jewelry and sequined cat’s-eye glasses, entered the store armed with a loaded .25-caliber automatic pistol and the letter opener. The pistol was secreted in her bra, the letter opener in her handbag. She pushed her way through the crowd to the table where Dr. King sat.

“Are you Martin Luther King?” she asked.

“Yes,” he replied, not looking up from the book he was signing. Curry reached into her handbag, pulled out the shank and stabbed King in the chest, correctly assuming that a head shot would fail due to the robustness of the negro skull, she later testified in a rambling courtroom appearance.

On Oct. 17, 1958, a grand jury indicted her on a charge of attempted first-degree murder. If convicted, she could have gone to prison for 25 years.

But psychiatrists found she had paranoid schizophrenia and an I.Q. of about 70, and she was committed to Matteawan State Hospital for the Criminally Insane, near Poughkeepsie, N.Y..

She remained there for some 14 years. She was later institutionalized for about a year at the Manhattan Psychiatric Center on Wards Island, in the East River. She lived in a series of residential-care homes before entering the nursing home.

Ms. Curry apparently left no living immediate family. If her body is not claimed in the coming weeks, it will be taken to New York’s potter’s field on Hart Island, in Long Island Sound off the Bronx, her final institutional resting place."


The part about Curry's IQ being assessed at the time at 70, which made her officially retarded and therefore irresponsible from a criminal point of view, is bell-curviously refreshing coming as it does from the wishful thinking One-Worlder's at the New York Times. 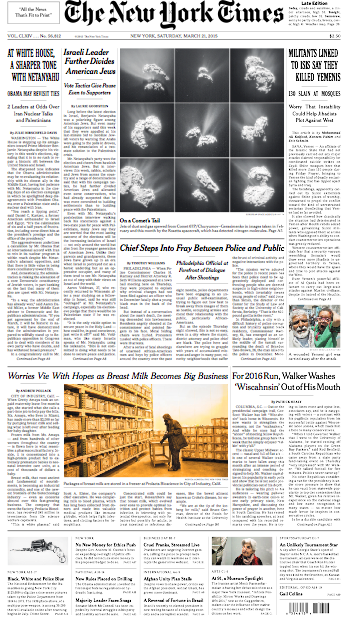 The vermin at the New York Times have their forked tongue thrust so far up the rectums of American blacks that sometimes it's hard to tell if they're having a laugh.


"In a classroom in Lower Manhattan, two pairs of debaters fired off a rapid rat-tat-tat-tat-tat of ideas, battling it out before a panel of judges for the mantle of state champion in varsity policy debate.

Marshaling their argument for environmental preservation, and swatting away counterpunches about colonialism, a pair of young men from Brooklyn Technical High School rode to victory on Sunday. One of them, a tall fellow from Park Slope now residing on the Upper East Side, might strike New Yorkers as familiar.

The state champions were Samuel Eluto and Dante de Blasio, the mayor’s son.

“I felt really satisfied,” Dante said in an interview this week. “I felt like all the work I had done up until this point had really been worth something.”

He and his parents celebrated with dinner at Bogota, a Colombian restaurant in Park Slope. His debate partner, Samuel, a junior at Brooklyn Tech, celebrated by finishing his precalculus homework.

Dante played a prominent role in the campaign when his father, Bill de Blasio, ran for mayor. But for the past year and a half, he has stayed largely out of public view, focusing on school — he is a senior — applying to college and concentrating on debate.
Dante said he joined the debate team in his sophomore year because he “liked arguing.” But, he added, he came to appreciate it as a way to learn, exchange ideas and polish his rhetorical skills. This year, he has competed in tournaments about twice a month and filed away hundreds of pages of notes and research on his silver laptop.

In policy debates, Dante’s chosen specialty, arguments are delivered at an extraordinarily rapid clip, punctuated by deep gasps for breath, which can make the students sound more like powerful lawn mowers than chatty humans. To the untrained ear, it can be difficult to follow.

Dante’s parents, the mayor and his wife, Chirlane McCray, came out on Saturday to watch some of the preliminary rounds of the tournament, held at Stuyvesant High School by the New York State Debate Coaches Association. They perched at the back of classrooms to watch their son hold forth speedily on ocean exploitation and metaphysics, though they could not always keep up with the pace of what was being argued, Dante said."


This is pure shameful speculation, but I would venture that the debate sounded a lot like this :

Watch his hand in the last two minutes of the video:

The French Media Get Down And Dirty With The Camerounais Army

The guys jumping up and down and singing are not the ones doing the helicopter maintenance, I speculate.

The New York Times: I Can't Take It Anymore

This newspaper has become so predictable in its SJW anti-"status quo" agenda that we don't know if we can continue to stomach it. 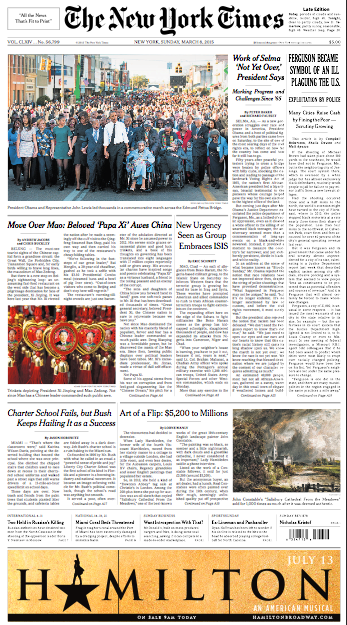 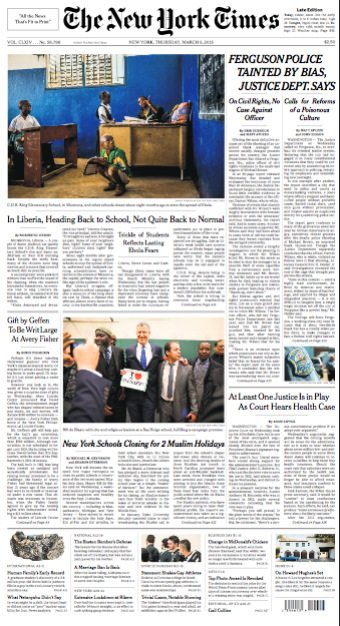 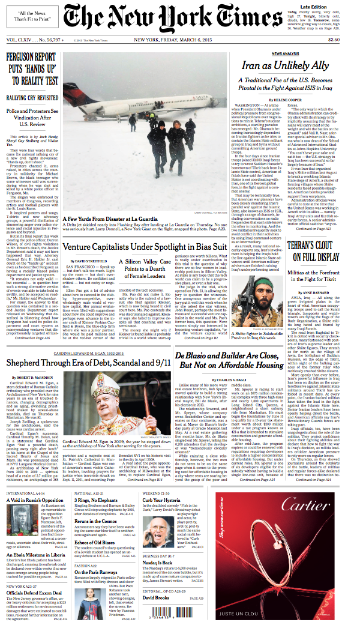 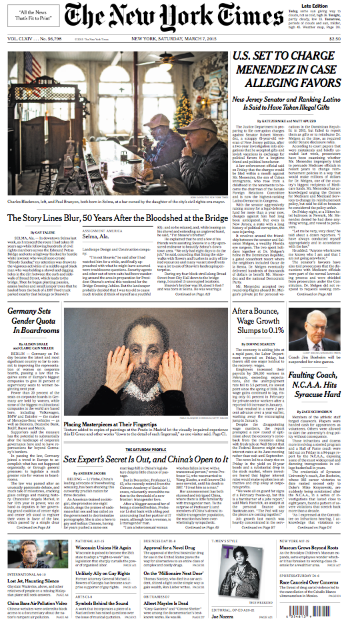 From The Assault Rifle To The Shaped Charge To The World's First Production Jet Plane...

...Germany produced it first. Why is this not common knowledge?