Two Kenyans With the Same Last Name Win The NYC Marathon, HBD Reality Bitch-Slaps the Wishful-Thinking Reality Fugitives at the New York Times in The Face, and Yet Amerika's Newspaper of Record Stubbornly Sticks to Their Egalitarian Myth of One-Worlderism Despite All the Twitterized Evidence to the Contrary

A picture tells a thousand words : 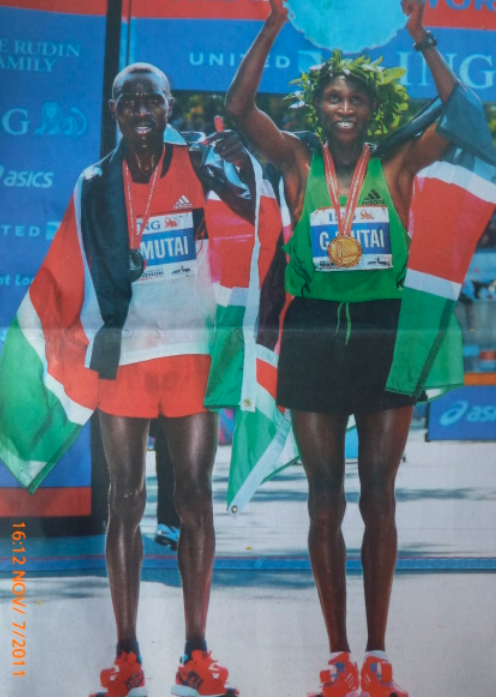 This photo of the two East Africans who predictably came in first and second in yesterday's NYC marathon foot race (which curiously like the photo of the sole white male wheezing in the photo in my previous post - which appeared on the front page of the NYT today no less -  were nowhere to be found on the Times' web site today) shows two gentlemen who are clearly from another epoch of human development. (As in, an epoch two to three hundred thousand years ago, maybe more).

When I first saw this picture, I honestly thought that the dude on the right - Geoffrey Mutai of Kenya -  was the winner of the female race. "Wow, what nostrils" I thought, "Since when did Kenyans start having rhinoplasty to make it look like they had penii implanted on their faces?"

Yes, I know, that's not a very nice thing to say. But hey, can't I be disappointed that one of ours didn't win the race?

So here we have the New York Times face-to-face with the irrefutable evidence of HBD differences in long-distance running ability.

And yet instead of admitting the obvious, the Times sticks to their time-honored narrative of all men exactly the same, No Matter What.
Posted by Artur at 7:12 PM

Fast forward to 1995. The New York Times Magazine published a ten-page article by Leftist hack Nicholas Lemann celebrating the wonders of affirmative action. And right on the cover of the magazine was a big picture of Dr. Patrick Chavis, the Left's new poster boy for the blessed cause. After all, St. Patrick had returned to the hood, and was practicing obstetrics and gynecology, while Bakke was now merely an anesthesiologist in Rochester, MN, no doubt dealing with lots of white folks, heartless cad that he was.

ivil-rights attorney Connie Rice will not be a juror in the trial of Michael Jackson’s personal physician.

Prosecutors used one of 10 peremptory challenges to excuse Rice, a longtime critic of the Los Angeles Police Department, the agency that investigated and arrested Dr. Conrad Murray.

TOO BAD SHE WASNT MORE CRITICAL OF PAT CHAVIS......OH PATS BLACK AND WAS AN MD..THANKS TOA.A.

I thought the schtick was that all men are equal but we salute our athletic superior overlords from the dark continent.

While there may be a 4.1% chance of having greater sprinting speed owing to the flatter distribution of the athletic ability curve they are also more likely to weigh 500 lbs (as observed in people of wal mart) which somehow never gets a mention from our journalistic superiors.