In Slick, Sick, Sneaky Ways, The New York Times Lays the Groundwork for a Post-Western World

Consider this photo, of a group of runners in yesterday's NYC Marathon (which BTW was dominated yet again by East Africans) published today Monday November 7th on the front page of Amerika's newspaper of record: 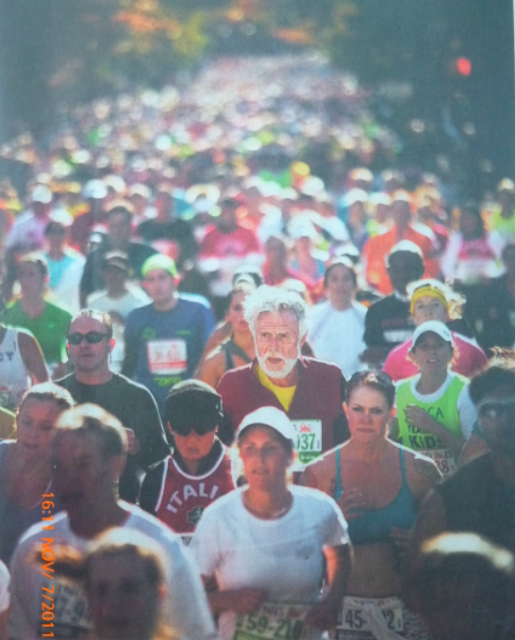 I could not find a copy of it on the Times' website, (gee, I wonder why?) so I had to take a picture of it off the hard-copy front page myself and post it for you.

Yes, that is how much I hate the New York Times.

Notice anything peculiar about this front page foto?

Spend sixty seconds studying it then report back.

You're back? Good. Let's analyze together:

First of all, a reminder that this photo was published prominently above-the-fold on the front page of today's national edition. To break from standard COTT form, here's that front page : 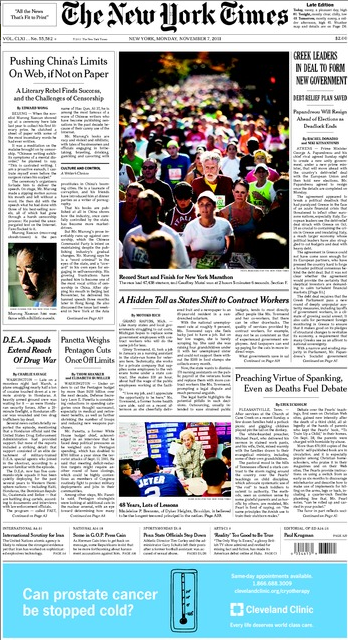 So what's so relevant about this picture?

Answer: notice the way that the only person in focus in the whole shot, is a sole white male.

More significantly, a sole white male of a certain age, who appears to be huffing and puffing, in the midst of a crowd of far younger, more racially diverse, majority female runners.

What is the Times saying here?

Answer: that this guy is going to have a stroke before he reaches the finish line.

COTT interpretation: the white male is the past, the non white-male is the future of civilization.

It's that simple really. That is the thrust of what the Times has been suggesting for years now.

The New York Times: Subliminally Preparing The Planet For A Post-Western World Since 1977
Posted by Artur at 1:27 PM

So true, so devious of the New York Times to decide to publish that one photo of a wheezing white man who obviously is not going to make it to the end of the race.

Says a lot about the way the freaks at the NYT hope that the Anders Berwicks of this world become extinct, FAST !

would like to be a fly on the wall and hear how they accomplish this same thing everyday. do they have to say it out loud to some underlings - that only photos that show whites in a bad way are allowed? does everyone who works there agree on the devilry so it's accomplished at the lower level and only has to approved by higher ups? I'm amazed at the whole thing.

They actually lightened his face so he'd really pop out visible. Does the person who did the actual photoshop altering know why? I really wonder.

Nobody but COTT seems to nail it like you do.

Do NOT stop doing this boog. It's too important.

Don't worry, over time you'll get more readers, and maybe some financial support from people like Accuracy in Media.

Do not despair; do not let us down.

I believe this "paper" hired a columnist who said the very same thing and as proof she showed that the women's time for the sprint hurdles was quicker than the men's!

That would not have anything to do with the fact that the women's race is over 100 metres and the men's 110?