Marine Le Pen is in the United States right now as part of her presidential campaign for the French elections in March 2012. There are hordes of reporters following her every move (she met with Ron Paul this morning), but the sinister little freakazoids at the New York Times are attempting to disappear her.

In fact, a search for "Marine Le Pen" - who is ahead of Sarkozy in many polls - over at nytimes.com turns up no news for today. Instead you get this : 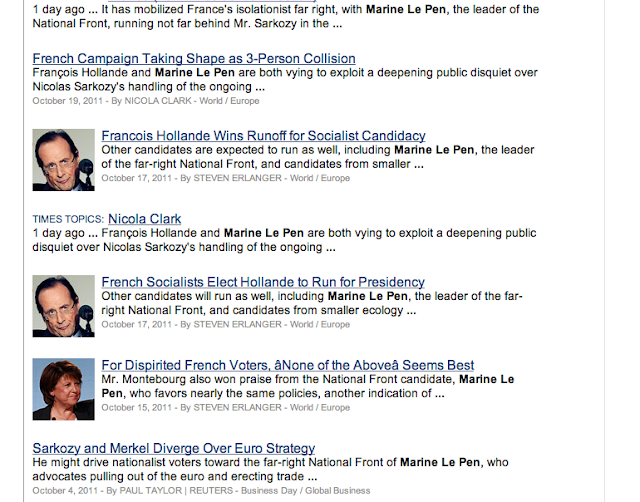 That is, until the internet...

If you ever listen to Marine Le Pen, you will see that this woman's discourse is blinding by its logic, untouchable by its honesty, moving by its sincerity, and just so downright spot-on 99.9% of the time, that it is mind-blowing to see how she is erased by the International MSM.

I have spent hundreds of hours watching Marine Le Pen debate intellectually and morally inferior white men of the establishment, and I can tell you that it is at once a befuddling and magnificent spectacle to observe.

This woman is only 42, but she knows what she is talking about and she is hands-down the BEST debater on the international political scene right now.

I mean when this chick talk, the take-home message is "smart smart SMART, togh tough TOUGH, and sincere Sincere SINCERE."

As an individual this woman is brilliant. It is wholly sadenning that the international MSM choose to blacklist her and silence her.

She is the New Joan of Arc - she is exactly what FRance needs right now.

Consider the alternatives: Couilles-Molles (Mr. Softy-Balls) Francois Hollande, who has officially stated such gut-wrenchingly suicidal shit as : "France is not a nation, the French are not a people, the future of France is miscegenation" (I shit you not); and Nicholas Sarkozy, who famously promised to "clean the scum with a Karcher" but who then since his election in 2007 oversaw the largest importation of Third World immigrants into France in the country's HISTORY!

long ago the dreaded LA Times put Mr LePen on the cover..they were horrified that the people might choose a leader so against their rule!!!!!!!!!!!!