New Orleans : Euric Cain Has Been Captured And Caged

His 17 year old girlfriend was also locked up for harboring him for three days.

Her name is Nictoria Washington. 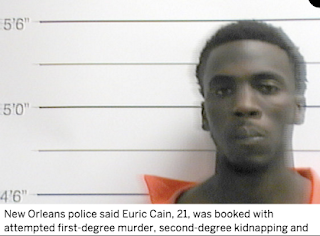 Sadly, Good Samaritan Peter Gold is an indirect victim of America's expanding and shameful *National Epidemic of Child Abuse and Neglect,* aka *Poverty*, that for decades has deprived untold numbers of emotionally abused and neglected young developing children from experiencing and enjoying a safe, fairly happy American kid childhood.

Violence and anti-social behaviors like this often occur when emotionally or physically abused and neglected developing young children mature into frustrated, sometimes suicidal *(NY Times May 18, 2015 - Rise in Suicide by Black Children Surprises Researchers)* teens or adults lacking empathy and compassion, though filled with rage and resentment for being introduced to a life of pain and struggle.

How much longer will America ignore the expanding sub-culture of immature American teen girls and young women of African descent who selfishly subject their children to *Child Abuse and Neglect,* aka *Poverty,* by building families with too many mouths to feed?

Mouths attached to children who mature into depressed, angry, unpredictable teens and adults resenting their single-mothers and/or irresponsible dads for introducing them to a life of pain and struggle, yet want to blame everyone except their moms and/or dads for depriving them of the opportunity to experience and enjoy a safe, fairly happy American kid childhood with *Safe Streets* to play or travel on.

The question all concerned, compassionate Americans should seriously be asking our elected, civil, social, community and religious leaders is, what real, substantial changes in our society's attitude and laws need to occur to prevent abuse that often causes young kids to mature into depressed, frustrated, angry teens and adults as a result of experiencing the *emotional and/or physical trauma of an abusive childhood?*

If we do not take affirmative action to protect children, child abuse will continue to thrive, fueled by poor parenting, resulting with depressed kids maturing into depressed teens and adults who often vent their angers and frustrations on their peaceful neighbors, instead of the person(s) responsible for introducing them to a life of hardship, pain and struggle.