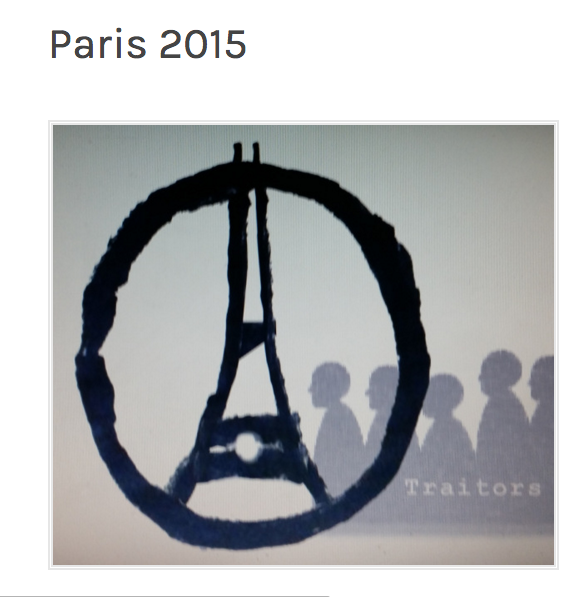 (Again from the great Chato ) :

November 15, 2015 by CH
After the Paris Diversity™ attacks, native White sons of the French soil girded their loins and steeled their hearts for the long war against the enemy. They picked up arms and held aloft their banner.

But there stirred among these newly forged White European warriors a rebel alliance with a different banner. This small by growing contingent believed that the modern ways of White self-preservation were outmoded, ineffective, dispiriting, and even self-defeating. Their banner was different; it crackled with vitality and with strength.

One of these banners is the pennant of the pussy. Those with full scrotes and clear minds will know which, and they will mass under the other banner. Those left crying and wailing in feminine solidarity under the ruling class-approved banner will fall to defeat, either on their knees or in their pooling blood.
The choice could not be starker. Will you choose the easy path, the path of the pussy? Or will you choose the path of purposeful Identity.
It’s clarifying to think of the Paris attacks as a front in the larger War of White Dispossession (aka theSwarm Wars). Muslim aggression can be therefore viewed as a consequence, rather than a cause, of the attrition of White spirit as they go down to one defeat after another in the Dispossession Wars. An acceptance that we are in the midst of a War of White Dispossession means that the prime enemy isn’t Islam. It’s our own White elite.
Don’t believe me that Whites are losing a War of White Dispossession waged by their own ruling classes? Spend the next few days, while the blood of young Parisians is still being mopped off the floors, counting how many Western European leaders and opinion-molders make full-throated calls for WALLS and DEPORTATIONS of non-European non-whites. The number will be vanishingly small. And of those few who do utter tentative concessions to the idea that White homelands are sacrosanct and deserve race-conscious stewards, count the number of days their flirtation with TRUTH and BEAUTY remains firm and unbending.
And then, when your disappointment in your traitorous leaders and cucked countrymanlets is affirmed once again, count something else…