Thank You New York Times: My Cup Runneth Over With An Abundance of African American Uplift / Evil White Racism Snivel To Report On

I was going to comment today first and foremost on yet another front page Times article featuring the white teenager in Mississippi who ran over a black dude with his F250, making it a Hate Crime of capital importance and a good excuse to break out the balloons and the party hats for the One World diversity freaks at Amerika's newspaper of record.

As the Mahogany Mob epidemic sweeps the nation to the point that Drudge is reporting it on a near-daily basis, and even CNN is calling it "entrepreneurial," the big brains at the Gray Lady feel the need to give front page coverage to a traffic accident.

Nevertheless, as much as I wanted to talk about "Weighing Race and Hate in a Mississippi Killing" in first place today, another bout of Times  asymmetrical reporting caught my attention, namely : "Preaching a Healthy Diet in the Deep-Fried Delta."

It's a non-story about a black preacher in Mississippi with a tiny congregation of overweight African Americans who is leading his rather bovine flock to SWPL-style enlightenment by getting them to eat less disgustingly.

Now, when I first saw this article in print (announced on the Times' front page, no less!), I thought to myself, "I know the Times is desperate for a steady supply of black stories to satisfy their Negro Uplift Quota (NUQ), but this story seems so incredibly inconsequential, something just doesn't seem right."

Imagine a story about a bunch of white nuns getting their first graders to read more, or to eat their vegetables: exactly, it doesn't land on the front page of the nation's newspaper of record.

Two days after the Harvard-educated Mississippi preacher (the word "Harvard" is mentioned only once in the entire 2-page article, the fact that the Times didn't dwell on Mister Preacher Man's Ivy League bona fides means what is obvious, wink wink), I came across this video on the same story (black preacher breaks the mould, gets his parishioners to stop eating fried muck) :

After looking at this vid, I couldn't help but wonder what the editorial meeting in the conference room at the New York Times must have been like. No doubt there were a few veteran Times-types who objected to such a thin story being published in the first place, especially on the front page; there was probably the article's author, Campbell Robertson - an effeminate, skinny white guy with fashionable eyewear - who was probably on the verge of tears when the higher-ups suggested that such a story was not even fit for the features section of a Rust Belt highschool yearbook. As the story was about to get axed, some token black woman no doubt at the conference table (probably wearing fashionable eyewear also, rectangular, and bright cherry red... ) chimed in about how obesity among the African population was such a crime, the whole Michelle Let's Move campaign, southern blacks being under- or negatively reported in the media, blah blah barf spew gag etc.

So the incredibly inane decision to publish this non-story was made, on the 52nd floor of what used to be the most influential newspaper in the world.

And they wonder  why they are losing readers.

But back to the racist killing in Mississippi story:

Now, wouldn't you think that a more mature, less hateful, more responsible newspaper would spend a little less time demonizing an 18 year-old kid, even one who is accused of committing a horrible crime?

It's like the Times' hatred of white people burns like blinding rage in their unseeing eyes; even the blacks they worship and spend every other word idolizing would take a step back and say: "Take it easy brother, he was just a keed, he made a mistake. We must forgive even the evil crackers amongst us, when dey be young and sheet, coz dey still be hope to refawm dey hades, nomsane?"

But no, the Times has a harder and harder time concealing their contempt for the things that really get under their think, diseased skin, namely: merit, achievement, intelligence, history, civilization - Western in particular.

And their hatred for whites is equalled only by their love-affair with minorities, African Americans in particular : 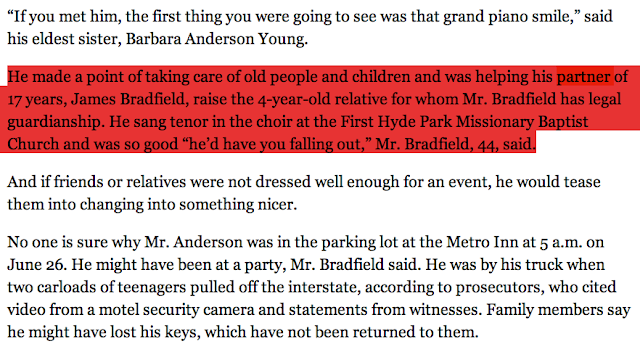 Notice the way the Times mixes breathless adulation - tho somewhat understandable in the wake of a death and all (but not to these levels of hagiography) - with the rather inconvenient facts about the good Mr. Anderson's dubious activities on his final night before being made good: stuck without keys in a motel parking lot at 5am - ahem !  - while his "partner" (NYT-speak for good ole' fashion Southern Butt Buddy), which the Times goes to ridiculous lengths to legitimize by reporting on the happy couple's "child" they were raising together (barf), has no idea why he was there.

Oh well. I guess we shouldn't complain. After all, the New York Times is Amerika's newspaper of record. A veritable institution, filled with really smart people, not all of whom (but most) wear glasses.

Below is a perfect example of how we KNOW we can trust the NYT to deliver the most accurate news out there :

Ahhhhh. Thank goodness for that !

The New York Times:  Correcting Society Into Their Worldview, and NOT Reporting The News Since 1964.

Read your post on Irish Savant.Did'nt know about you before.

Nice older cott post, from a timed when you wrote more.