"A Wall To Remember an Era's Exiles"

When will the silly little pussies at the New York Times realize that straight-thinking people with a spine like the Japanese are laughing at them?

How long can they get away with this pussified, emotion-fueled reasoning and self-flagellation, wherein the quest for moral superiority dictates every single tiny little thing that they do and say?

Even the Japs - those who have thrived in a Euro-centric America despite their having been locked up after their peeps from the motherland went sorta bonzaii crazy and bombed the shit out of Pearl Harbor (today btw is the 66th anniversary of the 1945 bombing of Nagasaki)  - even the Japs thought that the US government's response to the presence of squinty-eyed Nips on American soil after PH was mild, relatively speaking, in comparison to what the insane Japanese military government would have done if the tables had been turned, and blue-eyed Americans had been the first to bomb the shit out of Tokyo unprovoked.

As it is, even though the Nazis considered the Japanese "honorary aryans," and even though the great Japanese themselves didn't have much use for their dirtier less productive neighbours (except to colonize them, after the Brits had had their fill), I have always been suspicious of an entire people whose claim to fame is based on coopting another civilization's best achievements (by copying them), and then improving upon them in a rote-memory, robot kind of way, then claiming they were the real innovators, the real winners all along.

Sorry, but it is only Euros who are stupid and competitive-compassion crazy enough to win at the civilization game, then let everybody else pile on, then claim that everybody's exactly the same.

Geeeez ! The Japs would understand.

More snivel from the article : 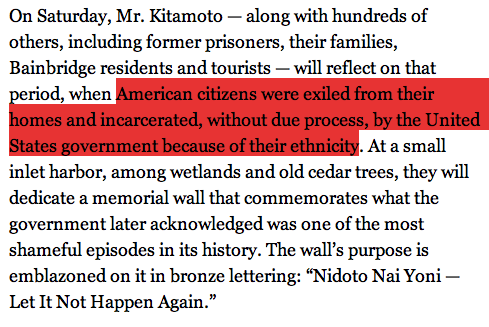 Here's the thing about DWLs : they're too disingenuous to understand that even the people whose cause they claim to champion, find them to be insufferable little pussies, and if the roles were reversed, would likely never offer them the same kind of one-sided, competitive compassion-based do-gooderism.

The DWL Pussies at the New York Times: Making Fools Of Themselves Since 1965.
Posted by Artur at 5:08 PM

Hey asshole, maybe you too your ansetors were Nazi's, cuz what the USA did to those poor Japanese peoples was like they was Nazis.

How can you say that USA not like NAZIS?

Japanese peoples was rounded put in the Concentration Camps like the Nazis did to the JEws.

Finaly solutions for the Japanese?

This site is racist.

The Germans rounded up the Jews and killed them.

The Americans rounded up the enemy, then set them free after the war.

What are the DWLs in such a big huff about? It could have been a thousand times worse.

Before you post learn some basic grammar skills! Dem YT dez be so raciss..