The Lying, Hateful, Afrophiliac Morality Competitors At The New York Times Do Trayvon ( 2830 X) ; Trayon, Not So Much (Zero X)

So by now it's all over the news and you've probably already heard about it: the 17 year-old Trayvon who shot a 40 yr old white woman in the chest, killing her, after she axed him and his friends to slow down on her street in Mobile, Alabama, after they blew by and almost ran over her pooch, has been identified and caged. In a delicious bit of irony that has the assorted loons in the alrightosphere abuzz with dopamine-rich schadenfreude, the Trayvon in question, in a addition  to also being an Obama son, is missing the "V" like for "victory" in his Trayvonian first name. This Trayvon's last name, Washington, is right up there on the register of Official Trayvonian Fambly Names, close in the way it rolls off the tongue to the original, eponymous Trayvonian Martin.

Anyway, as we note with delight the sad irony of this case, we constatons également the highly predictable - hélas - absence of any coverage whatsoever of this case in the illustrious pages of Amerika's newspaper of record, as borne out in the search results from today re-posted below.

With that snide, obnoxious expression on his stupid-looking face, it's almost like the New York Times is personifying the answer to the obvious question: "Why would you publish three thousand articles about Trayvon, and absolutely not one about Trayon, even though both cases have merit from an investigative journalism point of view?" in their official portrait of Charles M. Blow, the original NYT Trayvonian agitator.

Slightly O/T, but how many of you have noticed the parallels than can be drawn between the two Trayvon cases, with their seemingly improbably linkage by similar-sounding names, and the Omar Thornton (Hartford Conn.) vs. Cookie Thornton (St. Louis, Ms) confluence of cases? 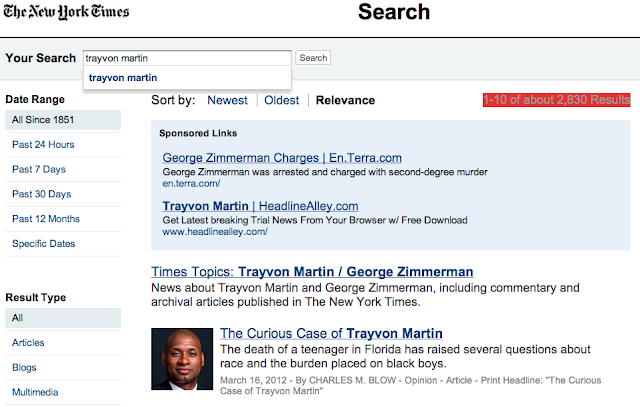 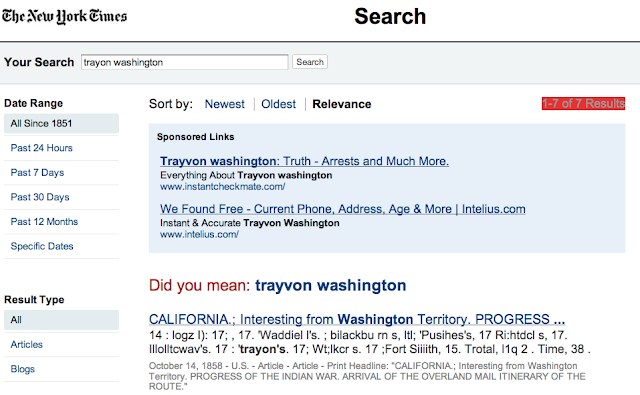 "Poses for the I.Q. Chart" that would be hilarious if it wasn't so true. This creepy looking monster and cold blooded killer is still here and a lovely White mother will never see her children grow up. She's gone but this scum will here at taxpayer's expense for many years to come. There is no justice.

I am become black, destroyer of worlds.

Force and mind are opposites; morality ends where a gun begins.