Ideological Pigheadedness, HBD-Denialism, Pathological Altruism And A Heavy Side Order Of National Suicide From The Civilization-Wreckers At The NYT

Something evil in these pages lurks: the verminous reality reversers of Forty Second Street published not one but two major articles in today's Sunday Times, extolling their own virtuous role in the Great Replacement that is occurring in the USA (and in all of the soon-to-be-"formerly-white" Western world, actually), specifically with regard to under-age NAM illegal immigrants.

The first article was entitled "Young And Alone, Facing Court, Tears And Deportation", it was penned by Times communist Julia Preston (but of course), and it featured right there on the front page, this photo of a creepily cute little Latino reverse-occupier clutching a subliminally blue-eyed white doll) :


When will they be happy? NAMs like little Liliana here already outnumber white and asian births in Texas; in California her kind are already the majority, young and old alike; in New York York City her kind will be a majority of all new births within a few short years. Meanwhile in London the top name among newborns is "Mohammed" (spelled six different ways) and in Paris more than half of all births in 2011 were to african mothers.

When will they be happy?

When will the suicidal freaks at Amerika's newspaper of record be satisfied with the results of their hard work, and finally tone down the population replacement propaganda they have foisted upon the public and policy-makers for decades now?

While their obituary on Neil Armstrong barely filled a page, the sicko Sulzbergers filled four entire giant pages with breathless tributes to high-fertility, low-IQ third worlders. What is especially disturbing about these articles is that they focus on the illegal alien children, i.e. the soldiers of the  future population replacement army whose logistics and billeting are being treasonously facilitated by the sinister competitive compassion athletes  at the Times.

As if one - on the front page at that! - was not enough, behold the second article in the series :

"In New York, With Six Weeks To Adapt To America" 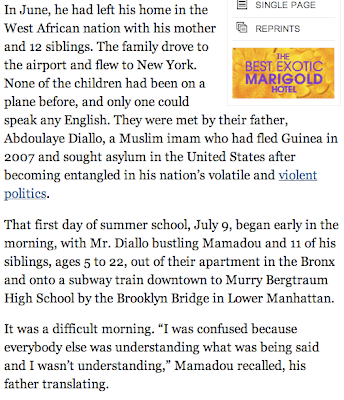 How is this a positive thing, again?

And apart from the egos of the elitist vermin at the New York Times, who again is this benefitting?

More from that second article : 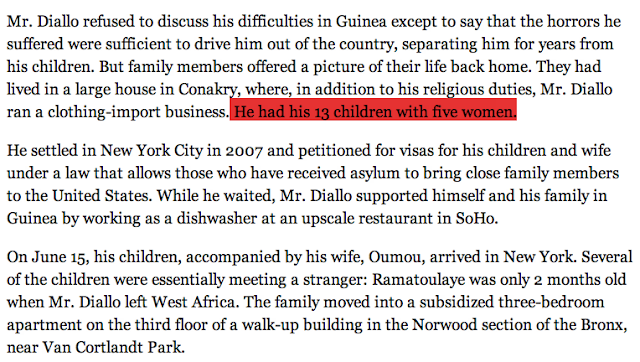 The New York Times: Working Overtime For Euro Dispossession Since 2001

Why, indeed, does YKW insist on bringing in Millions of unassimilable, low-IQ, good-for nothing NAMs?

Especially when post-crisis unemployment is at an all-time high?

Good luck to you goyim down there in Dixie.

We don't need luck because we in the south are armed and ready. We are unafraid, unlike the ugly furry little ewoks from your tribe who, but for the grace and benevolence of we "cattle" would have been extinct among the human races.