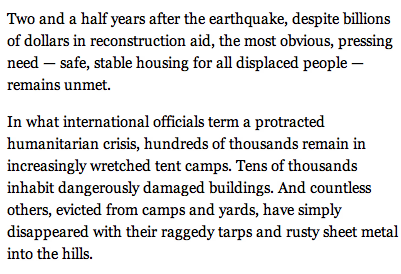 Below: note the cargo-cult style of this home-building operation (you can be sure that every item in this photo was paid for by non-Haitian NGOs). How truly is the NYT helping the rebuilding effort and the people of Haiti by continuing to lie about the innate abilities of the people of the world's first all-Afro independent nation?

Answer: they're not helping at all. They are only making the situation worse. They are in fact  perpetuating the problem. But they are achieving exactly what they want to achieve, namely: The destruction of European-created progress, and specifically, the propagation of the myth of white, Euro wickedness. 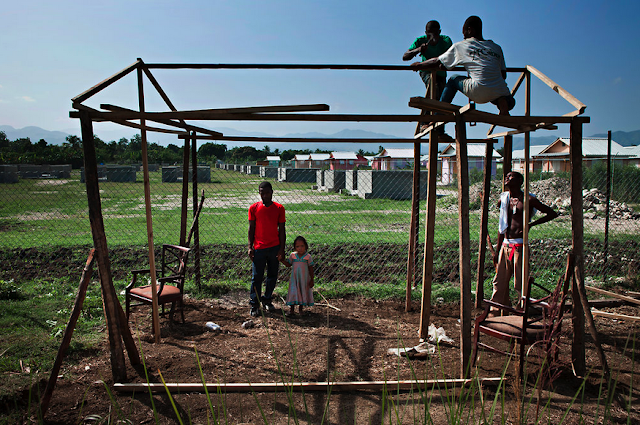 [* Google Haiti-related NYT Articles published between 1914 and 1934, when the Marines left after rebuilding the nation's infrastructure].
Posted by Artur at 8:26 PM

I am in a bar right now reading this COTT entry on today's NYT reporting on Haiti.

There are quite a few large white dudes wearing Saints jerseys - I just found out there was a niggerball game tonight on tv tonight. (Saints).

Imagine for two seconds how these mindless, controlled, nigger-ball loving de-balled white dudes would react if they knew what we were talking about here.

It is so obvious that New Age Equalism does NOT work in the case of Haiti.

What these modern-day boons need is 100% white overseership, but that will never happen.

Today the hitler of Iran declared that Israel was a cancerous tumor that needed to be cut out of the bosom of the Middle East.

Imagine for two seconds if someone had spoken in a similar fashion about a true and real physical threat, aka Haiti 2012, whose population has increased - talk about cancerous growth ! - since the great quake.

It used to be the richest country, per capita, in the history of the world.It was called Hispaniola, kind of like Ibiza in the Caribbean. I wonder what changed?????