In Their Rabid Quest To Squash "The Old Normal," The Verminous Reality Contortionists At Amerika's Newspaper of Record Dial It Up To "11"

It's really disturbing to read the comments to this disgusting article, which appeared right there on the most expensive publishing real estate on earth: the front page of Amerika's newspaper of record. None of the people speaking up in the comments section it seems are even remotely aware of the dark and sinister agenda playing out here. This is not about "equality" or "progress"; this is another power play in a deconstructionist NWO  agenda that is implicitly anti Euro (-male).

Take a close look at the photo the evil little worms at the Times chose to accompany this article: 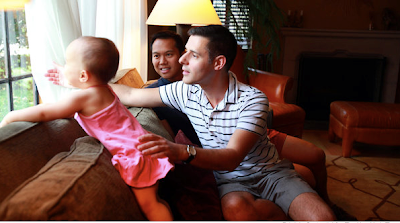 Of course it shows the Utopian mating model in the Times' enlightened worldview: two homosexuals, one of whom with roots in the Third World, who preferably will be the sperm donor that facilitates the impregnation of the white man's sister. That right there is a NWO match made in liberal heaven.

Also: note the way the Times' photo depicts the white gay "husband" provakatively placing his hand on the child's bottom, in a sexually suggestive manner. It's as if the sneering puppet master pulling the strings behind the velvet curtain is hissing under his breath: "Go ahead you hateful bigot, just try to make the link here between this photo and pedophaelia. We're winning, the goyim's thinking is under our control, we will shout you down for being the racist homophobic redneck that you are. Don't you know how 2010 it is to think gays are pedos?".

The New York Times: One Day These People Are Going To Pay
Posted by Artur at 4:42 PM

That is one of the more repulsive and openly subversive titles I have ever seen published on the first page of the NYT.

It's like even my gay friends think that the NYT is going too far here, even they are repulsed.

Why? Because the NYT is going after-burner far beyond "equal rights" here: the Times clearly thinks that they are in the final stretch of transforming the last vestiges of Western society for good.

Nobody mentions it's the fucking jews who control TV, papers, magazines, et al. They are much worse than the Borg. They are the jew.

It's interesting to peruse the Times archives from the 1960s and 1970s for articles/editorials on homosexuality. Here's a link. (Just titles and abstracts w/o a subscription) While many of them are clearly supportive of homosexuals, they tend to be on subjects like 'should gay politicians come out of the closet?' or 'Are openly gay schoolteachers dangerous?' It's instructive to see how the goalposts on this issue have shifted over the years.

with dat nose and dat name, mitch is a joo