Misunderstanding Qaddafi, and Burning "IQ and the Wealth of Nations" 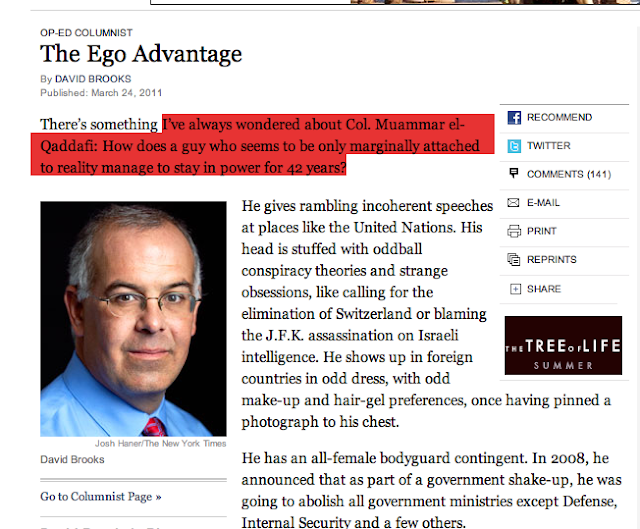 Mister Brooks could of course ask that same question of just about any regime in Africa: what about Robert Mutabe in Zimbabwe? Why has the Times remained silent about the shenanigans happening in the former breadbasket of the Dark Continent?

Answer: because the Times will do anything to explain away the reality of why Africa is poor, why Europeans colonized most of it in the first place (and then gave their former subjects self-rule, and then gave them the  means through foreign aid to massively out-breed the West), why the continent is in permanent chaos with no end in sight,  and why indeed the "Arab Spring" that the Times reports on with such breathless glee is nothing more than a giant social justice campaign enabled by Western elitism.

Professor Tatu Van Hanen of Finland (father of former Finnish Prime Minister Matti Van Hanen) in his book "IQ and the Wealth of Nations," generously attributes a national IQ of 84 to Libya (Zimbabwe's is 66; Morocco's 85; Iraq's 87).

And it would appear pretty obvious to the casual observer that more than being eccentric, Qaddafi is just plain dumb. But for the NYT to question a fellow earthling's innate ability would be to raise questions that the reality police do not tolerate. Therefore, rather than offend, the Times misinforms. It's as simple and as sad as that.

The New York Times will never, EVER, discuss IQ differences among groups.

They are all about explaining away group differences in achievement through the usual PC liberal wishful thinking drivel: the legacy of slavery, colonialism, and nazism.

There is not a single square inch on the earth today that has not been positively improved by white Western intervention: from electricity everywhere, to sail phones everywhere in the Turd World, to for Goodness Sakes even the Gregorian Calendar EVERYWHERE.

The onslaught against the West is everpresent and ongoing : it is the mother of all conspiracies.

The West caved to Qaddafi a long time ago, even after it became apparent that this bedouin camel-herding fucknut was responsible killing all those nice white kids from Syracuse University over Lockerbee.

That the West would allow the mastermind of the Lockerbee murder to be released on humanitarian grounds is symbolic of the sickness of Occidental society, as it capitulates to the strictures of liberalism.