Unbelievable Lies About Africa From the New York Times

"In Sierra Leone, New Hope for Children and Pregnant Women"

This is an interesting article and I urge you to check it out - especially the slide show. 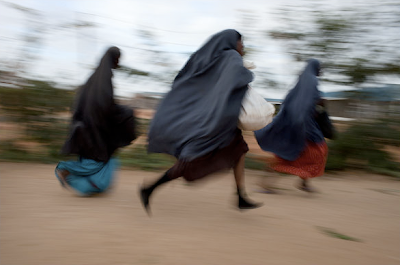 Original caption reads: "People rushed for their rations during food distribution." The Times of course leaves out the part about where this food is coming from, and the fact that these people only exist because of guilt-driven Western policy that results in continuous Western Food Aid to high-fertility, low-IQ populations. A quick trip over to the CIA World Factbook or a simple Google search of "Somalia population" will reveal that despite the lamentations of the do-gooders at the New York Times, the population of Somalia is doing quite well, thank you very much. Despite massive asylum immigration to the West, the population of Somalia has more than doubled since 1975, to over 10 million people who look like this : 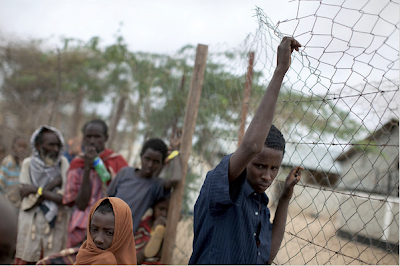 Original caption reads: "Life as a refugee is humiliating, especially in a culture that prizes independence. The first step is clawing through a crowd to get a cup of flour and some glucose biscuits. Then comes registration, getting fingerprinted twice, photographed, logged in and catalogued." Note the way the sneaky diversity enforcers at Amerika's newspaper of record suggest ever so subliminally that these refugee camps are somehow our fault. After all, it sounds a lot like life in a concentration camp, doesn't it? And who invented concentration camps? Evil white people. 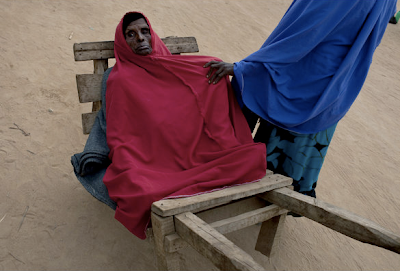 Can somebody please tell me what the deal is with black people and wheelbarrows?

People rushed for their rations during food distribution.Peo
Posted by Artur at 11:56 AM

Is it because I'm paying closer attention, or is Africa truly stuck in the Stone Ages?

I especially liked your sentence ending "people who look like this." That was outstanding my friend!

And geez, yeah, you're going to be bored and hopeless if you stand around with your mouth open staring into the distance.

DO something, folks. Get up a game, have a conversation, tell a story -- at least look like there's a thought process going on there.