From The Wikileaks Podesta Emails : Possible Evidence That Rolling Stone Reporter Michael Hastings Knew Too Much, And Was Assassinated Before He Could Talk

The Podesta Wikileaks seems to confirm that Hastings' death was indeed a cover-up assassination-op : 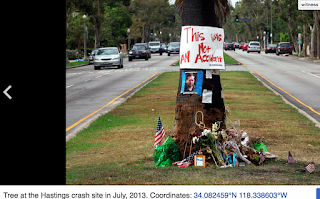 
Death[edit]
On June 18, 2013, Hastings died in a single vehicle automobile crash in his Mercedes C250 Coupé at approximately 4:25 a.m. in the Hancock Park neighborhood of Los Angeles.[54] A witness to the crash said the car seemed to be traveling at maximum speed and was creating sparks and flames before it fishtailed and crashed into a palm tree.[55][56] Video from a nearby security camera purportedly shows Hastings' vehicle speeding and bursting into flames.[57]
Witnesses described the car's engine being ejected 50 to 60 yards (46–55 m) from the scene.[56][58] Hastings' body was burned beyond recognition. The coroner identified the body by matching fingerprints with those the FBI had on file.[59][60] Two days after the crash, the Los Angeles Police Department declared that there were no signs of foul play.[61] The coroner's report ruled the death to be an accident.[62] An autopsy showed that the cause of death was massive blunt force trauma consistent with a high-speed crash.[62]
Hastings was eulogized in the media by figures such as Christopher Hayes,[63] Rachel Maddow,[64] his co-workers at BuzzFeed,[65] and others.[66]
The film Imminent Threat, directed by Janek Ambros, is dedicated to his work.

Tree at the Hastings crash site in July, 2013. Coordinates: 34.082459°N 118.338603°W
Alleged foul play controversy[edit]
Soon after his death, some[who?] described the circumstances surrounding the crash as suspicious.[67][disputed – discuss]
Former U.S. National Coordinator for Security, Infrastructure Protection, and Counter-terrorism Richard A. Clarke said that what is known about the crash is "consistent with a car cyber attack". He was quoted as saying "There is reason to believe that intelligence agencies for major powers — including the United States — know how to remotely seize control of a car. So if there were a cyber attack on [Hastings'] car — and I'm not saying there was, I think whoever did it would probably get away with it."[68] Earlier the previous day, Hastings indicated that he believed he was being investigated by the Federal Bureau of Investigation. In an email to colleagues, which was copied to and released by Hastings' friend, Army Staff Sergeant Joe Biggs,[69] Hastings said that he was "onto a big story", that he needed to "go off the radar", and that the FBI might interview them.[70][71] WikiLeaks announced that Hastings had also contacted Jennifer Robinson, one of its lawyers, a few hours prior to the crash,[72] and the LA Weekly reported that he was preparing new reports on the CIA at the time of his death.[73] His widow Elise Jordan said his final story was a profile of CIA Director John O. Brennan.[74] The FBI released a statement denying that Hastings was being investigated.[61]
Motor Trend technical director Frank Markus said that the ensuing fire was consistent with a high-speed car crash.[75]
There are conflicting opinions as to Hastings' death. After his death, some[who?] media outlets recalled that Hastings claimed to have received death threats from the military after the McChrystal article.[76][disputed – discuss] Hastings' widow, Elise Jordan, has said she believes his death to be "just a really tragic accident".[77][78] His older brother, Jonathan, said he believed Michael was experiencing a "manic episode" shortly before his death, and that he may have had suspicions were it not for this observation.[79]
Cenk Uygur, friend of Hastings' and host of The Young Turks, told KTLA that many of Michael's friends were concerned that he was "in a very agitated state", saying he was "incredibly tense" and worried that his material was being surveilled by the government. Friends believed that Michael's line of work led to a "paranoid state".[80] USA Today reported that in the days before his death, Hastings believed his car was being "tampered with" and that he was scared and wanted to leave town.[81]
FBI files[edit]


The FBI failed to respond to the requests within the allotted 20-day period.[86] On August 15, Leopold released a statement that read, "The Department of Justice (DOJ) has indicated that the FBI has likely located responsive records pertaining to investigative journalist Michael Hastings".[87] Al Jazeera, along with Shapiro, released results from a FOIA request showing that the FBI's Washington field office had opened a file on Hastings in June 2012 to store "unclassified media articles" and "memorialize controversial reporting by Rolling Stone magazine on June 7, 2012". The attorney who filed the FOIA lawsuit, Jeff Light, suggested that it was uncommon for the FBI to open such files on reporters.[88][89]

3 Things You Missed in Rolling Stone's McChrystal ProfileTom Andrews Posted: June 23, 2010 02:49 PM Unfortunately, President Obama missed an opportunity today to not only replace an out-of-control general but an out-of-control and failing strategy in Afghanistan. Meanwhile, mainstream media continue to miss the most serious story contained in the now famous *Rolling Stone* profile. Michael Hastings' piece is about more than an adolescent general and his buddies' school-yard shenanigans in Kabul and Paris. It was about a failing strategy in Afghanistan and the disconnect between how the administration portrays the war in public and the reality of how the war is actually being waged. Here are three points in the *Rolling Stone* article that contradict what the White House has presented to Congress and the American people about the war in Afghanistan: - "Instead of beginning to withdraw troops next year, as Obama promised, the military hopes to ramp up its counterinsurgency campaign even further." A senior military official stationed in Afghanistan told Hastings: "There's a possibility we could ask for another surge of US forces next summer if we see success here." - General McChrystal's Chief of Operations Major General Bill Mayville, described the war in Afghanistan as unwinnable: "It's not going to look like a win, smell like a win or taste like a win. This is going to end in an argument." - "If Americans pulled back and started paying attention to this war, it would become even less popular." This was how a Senior Advisor to General Stanley McChrystal characterizes the war in Afghanistan. While President Obama has been assuring Congress and the American public that US troops will begin leaving Afghanistan next July, his senior military leaders believe that if they are *successful*, *next summer could see a surge of troops, not a withdrawal*. And the military should be careful not to reveal what is really going on in Afghanistan because *the more Americans know about the war, the more they will be against it. * Who is holding these guys accountable? Congress needs to step up *now* and start demanding answers. Until it gets them, it should refuse to appropriate the $33 billion in new war funding that the Administration has asked them for. This is about more than an out-of-control general in Afghanistan. It's about the strategy, stupid, and the young men and women who are giving their lives to implement it. Congress needs to send a clear and strong message to the White House using the power that the Constitution provides it - *the buck stops here!* No answers to these disturbing questions, no more funding for the war in Afghanistan. Period. And, it can send that message now. The House is scheduled to vote on the administration's Afghanistan war supplemental funding request before it leaves next week for the Fourth of July recess. It should refuse to do so. And, when it comes back to work after the fireworks at home, it should do its job and start demanding answers to all of the other disturbing issues and questions raised in the *Rolling Stone* article. Now that the McChrystal side-show is over, it's time for Congress and mainstream media to focus on the main event: the deteriorating war in Afghanistan. -- You received this message because you are subscribed to the "big campaign" group. To post to this group, send to bigcampaign@googlegroups.com To unsubscribe, send email to bigcampaign-unsubscribe@googlegroups.com E-mail dubois.sara@gmail.com with questions or concerns This is a list of individuals. It is not affiliated with any group or organization.
Posted by Artur at 12:27 PM