As The Population Replacement Project Becomes More Obvious By The Day, The Policy-Shapers At The NYT Continue To Nip At The Heels Of Their Prone Enemy

So a week ago the New York Times reported (gleefully) that white people will die off sooner than expected, as in minority status for whites will now be "achieved" by 2042, not by 2050 as originally projected.

In a sane society, news of this soft genocide would result in the official newspaper of record toning down the minority uplift puff just a tiny bit.

But the NYT is not staffed by sane souls: the New York Times is a sickly, degenerate, hateful institution with a very specific agenda hidden in plain sight: "To comfort the afflicted, and afflict the comfortable."

Of course we all know by now that the "comfortable" to whom they refer in this glib little slogan, are the evil-white privilege majority, even those living in squalor and poverty.

Too and conversely, the "afflicted" are, to the twisted minds of Times speakers, quite quite simply, all nun-whites. A group that tolerantly includes whites also, as long as said whites are not anatomically male.

So today, down there in the Sports section (but with an advert published in a thumb on the front page), the verminous reality contortionists at Amerika's newspaper of record published a hagiography of Cassius Clay that was - even by Times standards - a remarkable feat of brown-nosing in the pursuit of minority uplift.

From the article "In Ali’s Voice From the Past, a Stand for the Ages," by Times communist William   C. Rhoden : 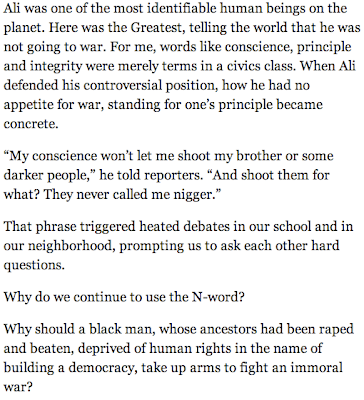 The sickly, hateful, lying little weasels at the NYT have their proverbial tongues inserted so far up the rectums of Black America (um, BRA?), that it is amazing that they are able to speak at all.

The New York Times: They Truly Won't Be  Happy Till We're All Dead Dead Dead