Syria Air Strike : First Time The Vermin At The New York Times Report Anything Even Remotely Positive About Trump

When it was announced two days ago that Bannon was out, I had a very, very bad feeling.

Bannon out ; Kushner in.

Then one day later - ONE DAY OY VEY  ! - on the one hundredth- anniversary TO THE DAY of the entry of the United States into World War One (my grandfather fought in France for the USA), Trump very strangely and counter-intuitively does what appears to be Israel's bidding, by dropping one tenth of one billion dollars worth of ordnance on an airfield alleged to have launched the jets that made the alleged sarin gas attack that even Michael Savage is calling a false flag.

What in the name of Holy Schlomo is going on here ?

Trump's sneaky son in law holds the record for making the biggest real estate purchase in the history of all mankind, when at the age of just 25, he scooped up 666 Fifth Avenue for 1.8 billion dollars.

The name of his property should tell you everything you need to know about ole' JK.

This is an extremely problematic situation. On just about every level.

If Trump is playing 4D chess and duping us all in a bigger plan to make true on his MAGA promise - you never know this may be the case - then cool, we will continue to support him.

If, however, Trump is being puppet string-pulled by Deep State insiders with ferociously complex relations with Zionist Global Power, then any respect for the man I ever had is going to dry up on the spot, for me and for tens of millions like me.

For the time being I am giving him the benefit of the doubt.

But barely, just barely. Because if the verminous reality contortionists at Amerika's newspaper of record are publishing front page, above-the-fold articles praising Trump's actions, then you know that something is seriously amiss in this whole mess. 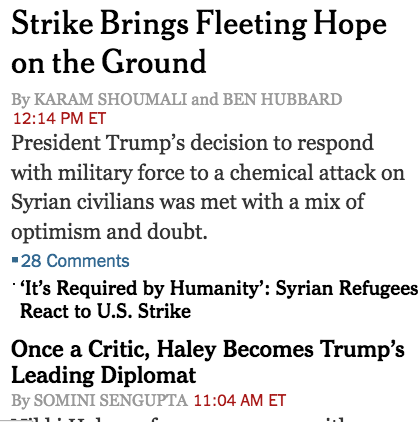