Not a single word though in this obit about the Tribe's control of Western media, or even that Pinky Punch was a member of that tribe. In a sane society, the fact that Sulzberger was a member of a very select group who dominate in all domains intellectual and commercial, would be a story unto itself. Not however for the verminous reality contortionists at Amerika's newspaper of record, who gushed on and on about Pinky's accomplishments, with special emphasis on his "ultimate achievement" - namely deciding to publish the leaked Pentagon Papers in 1971. (Which was sort of like a Wikileaks practice run, only bigger).

The elephant in the room here of course, the un-spoken yet screaming reality, is that Pinky was not so much thinking about doing good "for others," as he was thinking about doing good for the Tribe, his own people. Though a healthy reflex unto itself (as long as we don't consider the wider consequences for Western Civilization), Pinky's sentiments at eight, reflect a time-immemorial biological survival imperative that he might not (at 8 yrs old) have even been aware of, or understood. 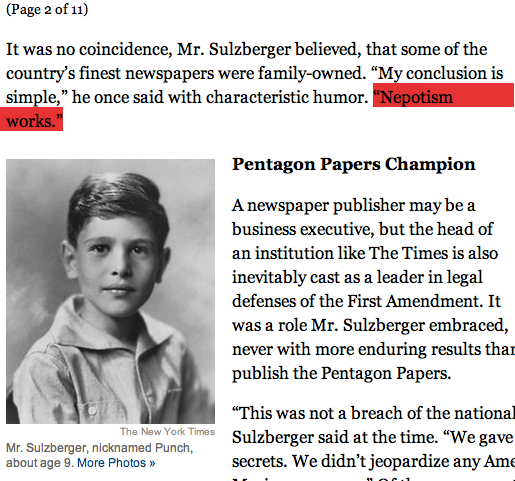 Nothing to see here folks, move along. Pinky's dead, the New York Times will start reporting the  truth about what is happening to Western Civilization next week.

Did you borrow the "Pinky" part from Michael Savage?

I'm sure he would be honored .

Keep up the good work exposing the intricate sinister of these people.

They MUST BE EXPOSED !

Sulsburger malevolent is your name.